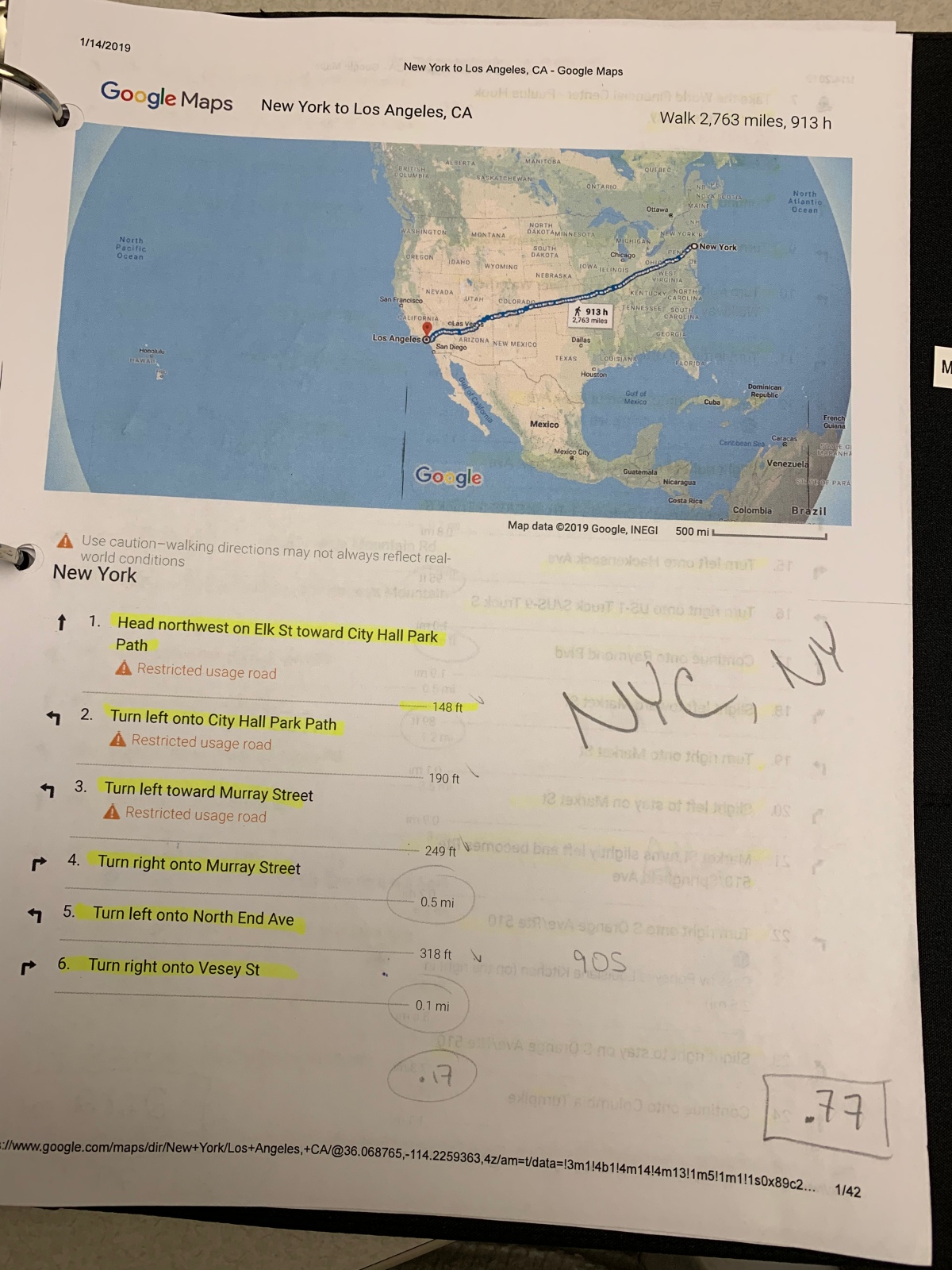 Okay, folks, here it is.   I’m not sure why it’s taken me so long to figure this out, but ya’ll know I set a 1000 and 1000 goal for the year (1000 miles….  followed by a long term goal to virtually travel across the US…   and 1000 lbs of clutter removed from my house).   Last night, I was playing with Google Maps and mapped out the route from NYC to Los Angeles, both walking and biking.   Believe it or not, there IS a difference.

Because the route literally takes me through the smallest towns in the US, I had to do some work with Google to identify recognizable landmarks along the way. I’ve made notes on my printout so I won’t forget. It’s almost comical, but since this route doesn’t include interstates, it’s made up of short distances on dinky roads, sometimes marked in feet not miles. I love how most of the landmarks noted are food places! Appears that I just passed Rita’s, one of my favorites! 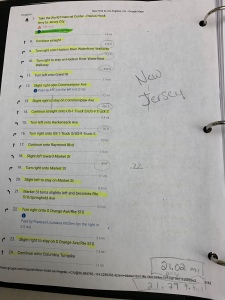 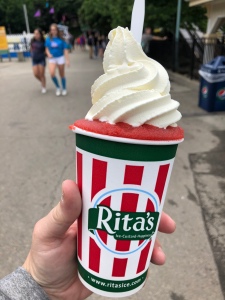 As of now, since I started my journey, I have traveled approximately 100 miles.  According to the route, I am approximately near Allentown, PA (technically, a little west of Allentown, more near Fogelsville or Hamburg).

Being from Pittsburgh, I have many experiences traveling across the state of Pennsylvania, usually via the PA Turnpike (Rt. 76).   In the recent past couple of years, I have two experiences specifically with this area which I appear to be traveling through virtually on my US walking / biking tour.  The first was a visit to Dorney Park. The second was the Cracker Barrel we dined at after my son and his girlfriend completed the Spartan race in Palmerton, Pa. Famished by the time we got there, they were tempted to order one of everything on the menu.

My kids and I love to experience amusement parks – and by experience, I mean EXPERIENCE.   We all love thrill rides, and we all have tremendous stamina for fun – we usually do parks from the time they open to the time they close.  We only allow fellow park enthusiasts to accompany (and trust me, it’s a very, very select few who have passed the test – nothing worse than being at an amusement park with someone who doesn’t ride everything!)   Several years ago, we created an Amusement Park Bucket List Challenge for ourselves – specifically to visit as many amusement parks as possible (Usually coupled with a meal at a Cracker Barrel… and we put pins on our Cracker Barrel map to show where we’ve been).  Our loose goal is to visit 3 new parks a year – parks we’ve never been to.  Being from Pittsburgh, of course, we’ve grown up going to Kennywood Park, usually multiple times a year (and frequently been to Hershey Park and Idlewild Park and Sandcastles). Of course, we’ve also been to Cedar Point in Sandusky, OH,  which, in our opinion, so far, is our favorite.  We decided we’d like to experience other parks, though, so made a list of all of the Cedar Fair and Six Flags parks and have somewhat systematically been checking them off of our Amusement Park Bucket List.

We visited Dorney Park a few years ago.  It was probably the 3rd or 4th of the Cedar Fair Parks that we’ve visited.  It’s approximately 4 hours from our home near Pittsburgh, so we left early one Saturday morning and drove straight to the park.   We purchased our tickets on-line, and arrived at gate opening.  Since it was so near our home, we were undecided about doing a day-trip, which we’ve done for other parks such as Hershey, Cedar Point, Kings Island, so we didn’t make any hotel reservations beforehand.

We found the park to be very clean, with decent organization (we pay attention to things like line organization, etc).  There are eight thrill coasters there. For the early part of the day, the lines were relatively short – we typcially use this time to ride all of the thrill rides – we map them out in an order that makes sense, and try to cover all of the thrill rides or unique rides (that we haven’t seen at other parks) before riding any of the standards.   On this particular day, we had probably covered all of the thrill rides by 4 pm, even though it was a Saturday. Incidentally, there were several Rita’s stands at Dorney. 🙂

We noticed when we bought our tickets that there was a discount price offered after 4 pm.   We also noticed that, after 4 pm, many people took advantage of these tickets.  The park got significantly more crowded after 4 pm, and the clientele changed significantly as well.  We noticed several times where an individual would stand in line and essentially “hold” a spot for 20-25 of his friends to join at the very last minute – despite signs all around the park indicating that line cutting was forbidden and violators would be kicked out of the park.  Several times, this happened right in front of us.   Typically, if someone held a spot for a friend, or someone in their party joined, I wouldn’t make an issue of it – but to have 25 people jump in front of you in line is beyond rude.  What was disappointing about Dorney Park staff, however, was that, although they were very much aware of the line violations, they did precious little to address.

By 8 pm, we had ridden and put up with all the crap from other patrons we wanted to, so we left the park. We’d certainly been able to drive back home that night, but at some point in early afternoon (before the crowd changed), I had made an on line reservation at a local hotel, so we set out to find it. Although it was a chain (that I won’t name), it was different than we expected. Run down and a bit sketchy, my daughter remarked that she’d seen the room before on an episode of Criminal Minds. We noticed a police car a few doors down and figured he wasn’t just visiting. Always up for an adventure, we stayed the night! We got up the next night and ate at the Cracker Barrel in Fogelsville before heading home.

Overall, our Dorney experience was ok, although not as good as some of the other parks we’ve seen. I’ll sure more about them as we travel across the country!

Be virtually blessed from Dorney Park!