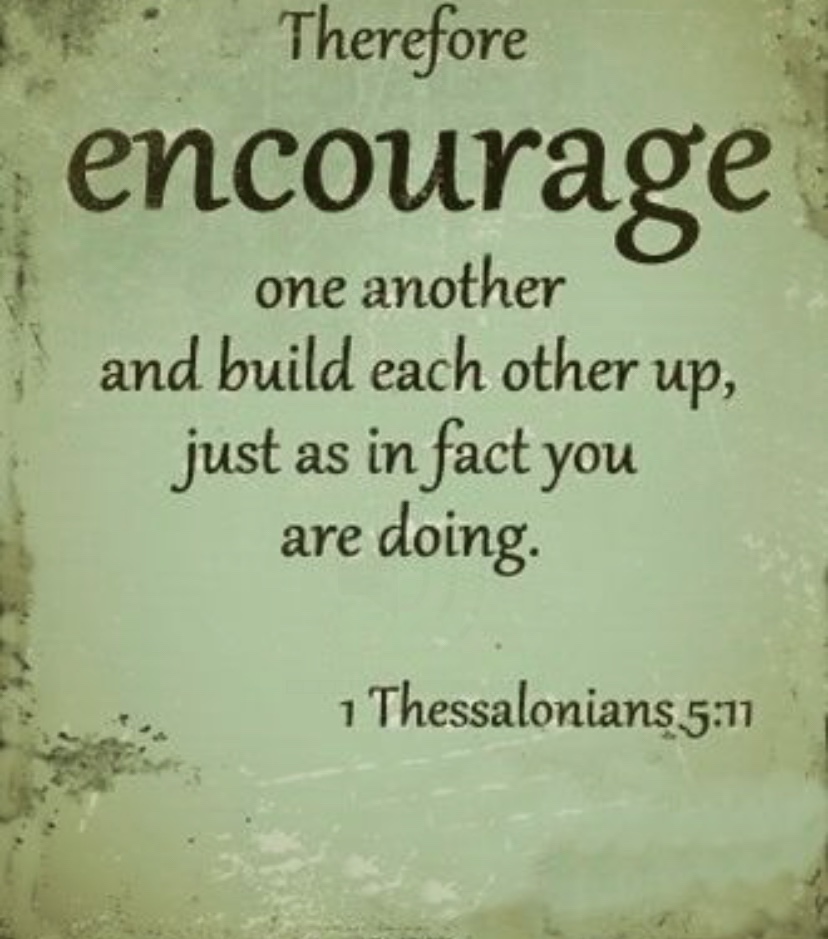 As I dive head first back into my lost world of fitness, my mind goes back 35 years to my first track season at A.E. O’Block Jr. High School in Plum Boro, PA.  35 years is a very long time, but somehow, it seems like yesterday.

There are a few life secrets I can let you all in on – some of them are not a surprise…   the first is that I am not a natural born athlete.   In my young life, I was more interested in music, and started piano lessons at the age of 4.   Throughout elementary school, I cared little about sports, although I do remember with pride the day I caught the fly ball kicked by Dennis Haygood (the best kickball player in our 4th grade class), making the 3rd out of that inning.  The entire class cheered, and despite the fact that it was his out, a wide smile came across his face as he congratulated me for making an awesome play and invited me to play in his team in the next game.

In 7th grade, my first year of junior high school, I decided I would join the track team.  Very few people ever got cut from the track team, and since there were many events to choose from, there were many opportunities to find a niche.   Good coaches will observe strengths and weaknesses and help their students get where they need to be.   Luckily, we had several good track coaches.

My first year in track was ok – not stellar, but ok; probably not unlike most of the first-year track team students.   When the end-of-the-season award time came, I set my sights on a goal for the next year….   the coveted letter.   I didn’t letter in my first year – and, truthfully, few 7th graders did.   But somehow, the desire to receive a letter in the next year took a-hold of my heart and transformed my apathy for life into an ardent desire to achieve.  Little did I realize that transformation would carry far beyond the track through my entire life.

The summer following that track season, I set out to improve what I could control – my endurance.  (Life Lesson: control what you can control; don’t dwell on what you cannot change).  I started to run on the streets of my neighborhood.  I got up early every single morning of the summer and forced myself to run 2 or more miles.   I’ve got to tell you that I hated it… at first.   Literally hated it, but I told myself that I had made a commitment to myself and I was going to see it through, so every day, I got up and put my shoes on and went for a jog.    (If I were honest, there were times in this 2 miles that I stopped running and just walked… I’d look at the mailboxes as I passed and say to myself, “I’ll start running at the next mailbox” and that mailbox would come and go and I was still walking….    this is the reason why I need a playlist to keep the beat for my feet when I’m running now…)

Something interesting began to happen…. After a few weeks, I found that I really enjoyed my morning run.  I began to look at the process of improving differently – yes, still with the end goal in mind, but focusing on the transformation that was happening.   I was “getting it”.  I remember on one particular morning, I ran past the school track, and came across a friend who was running on the track.  As I continued toward my “finish mark”, I was getting tired, and he was running along side me.  I said, “I’m done, I can’t make it.”   He grabbed a-hold of my arm and pulled me – he could run much faster than I could – he forced me to keep running til I crossed the finish line.   I continued running through the entire summer and into the next school year… and into the next track season.  My endurance had also paid off, and I discovered that, although never a sprinter, I had endurance to run the 880 and/or the mile events, depending on where the coach needed someone.

It was during this season that I discovered the high jump event as well.  What fun that was!  The Fosbury Flop (more on this later).   Turns out I was pretty good at this event… though not quite good enough to beat Kelly Gress.

Some action shots below: 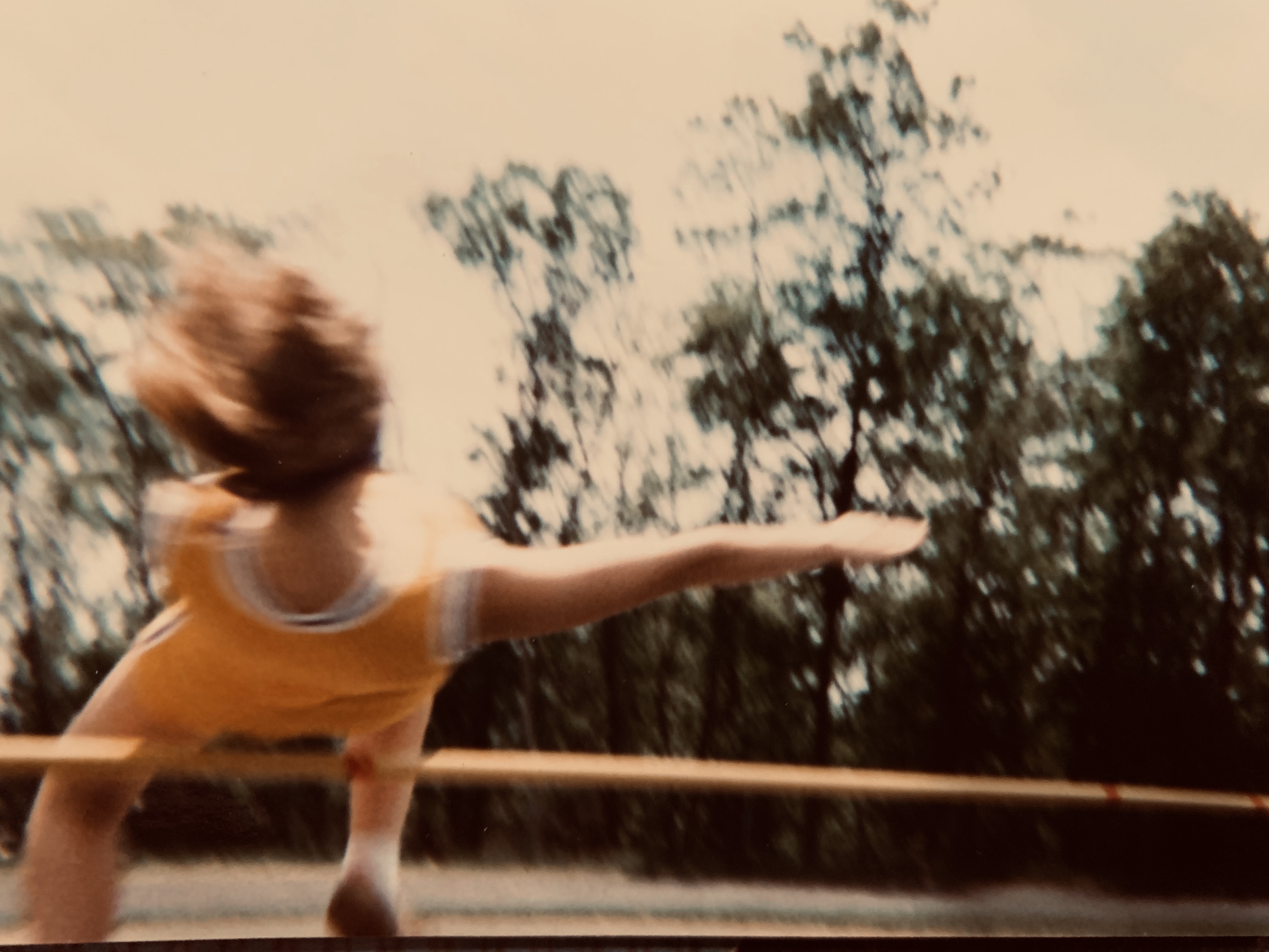 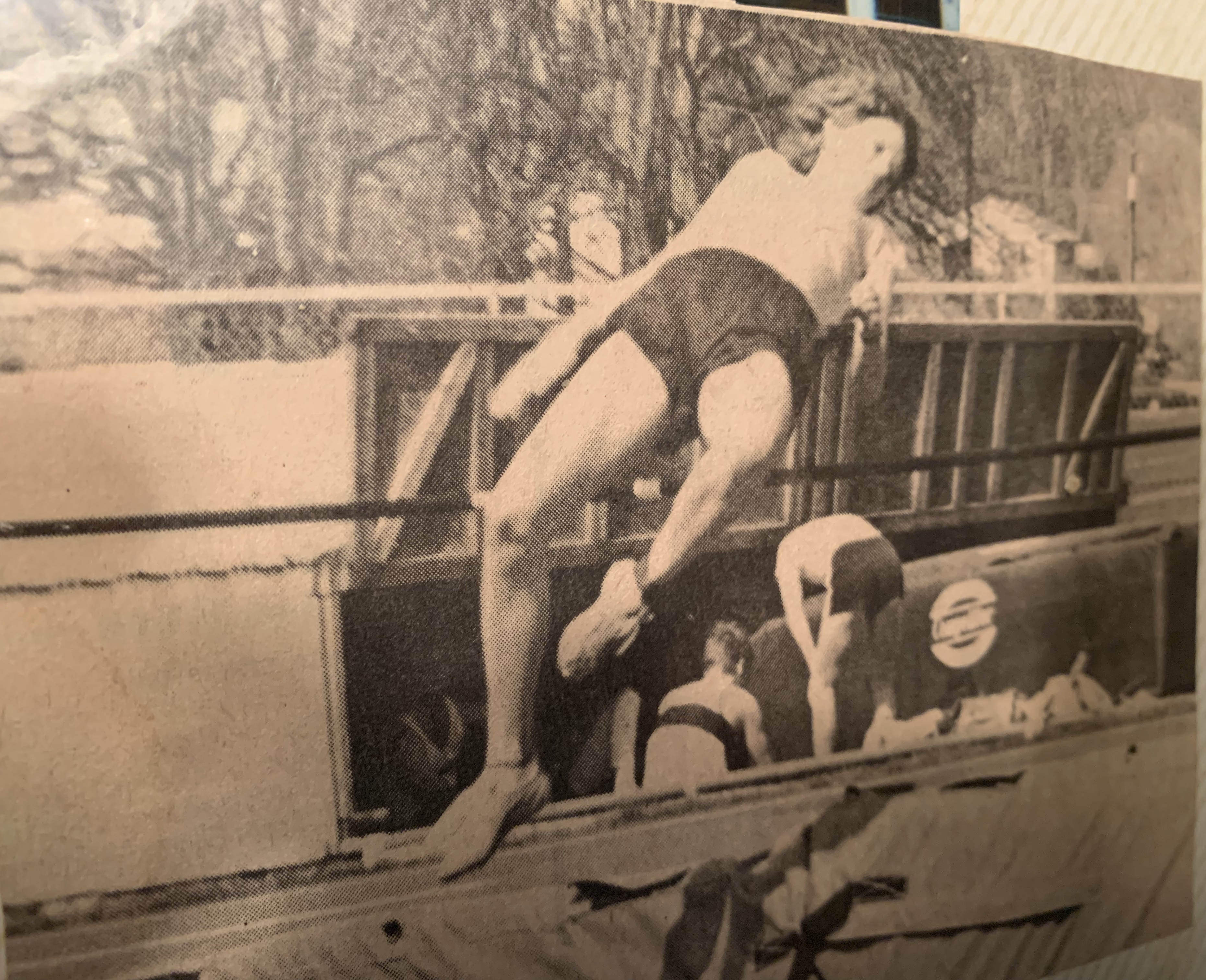 Kelly was very good at this event – but she was also a little heavier than I was. For certain track/field events, contestants are broken into weight categories.   At the time, my weight was right on the border between Lightweight and Middleweight.   Kelly was a solid Middleweight, so I decided it was in my best interest to compete as a Lightweight.    For me, that meant an absurd fixation on keeping my weight on the Lightweight side. 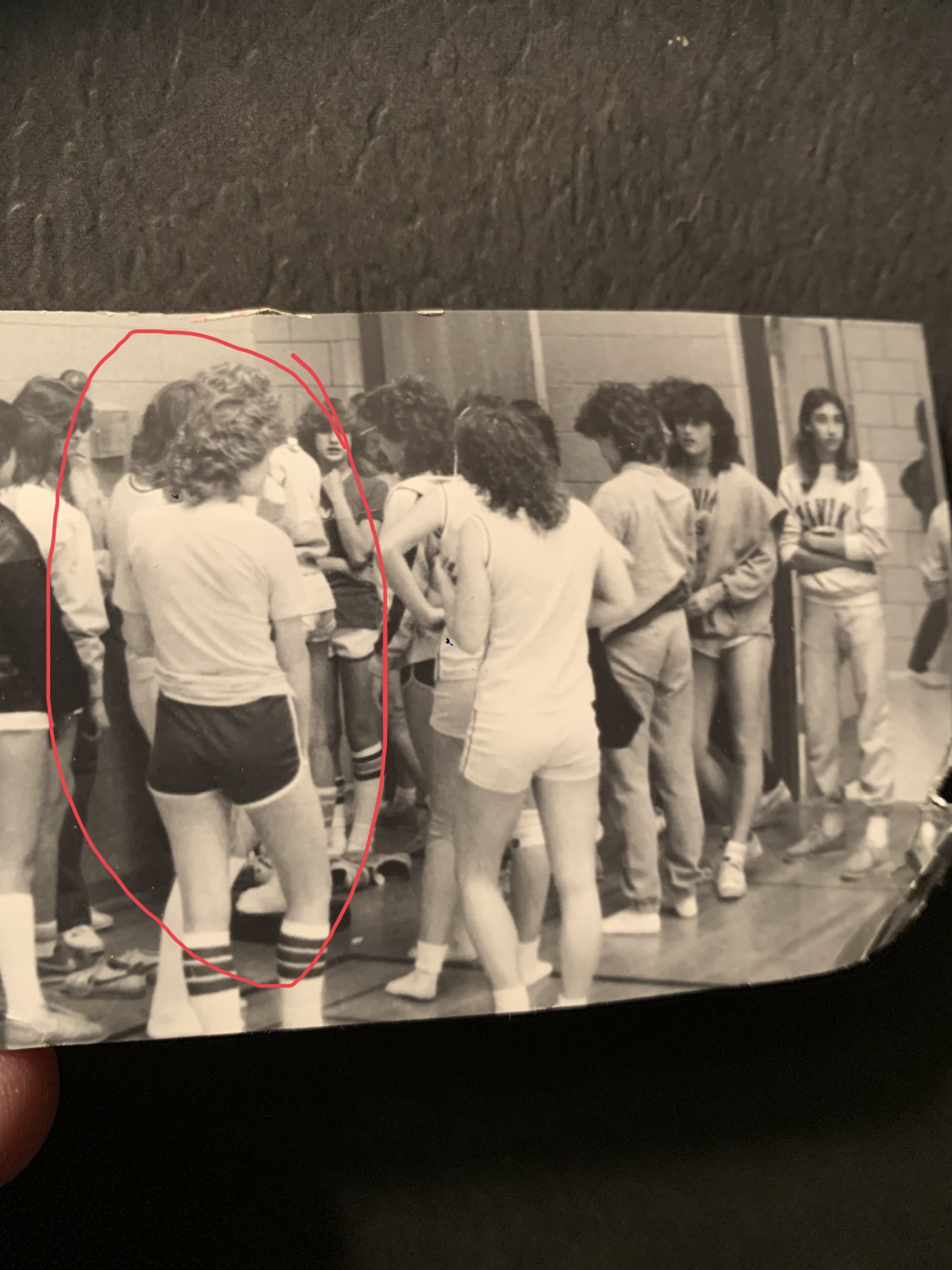 I might add that, at that time, I really didn’t have a lot of excess weight on me, so in order to stay below the threshold considered Lightweight, I had to do absurd things with my body to try to loose as much of my water weight before weigh-in’s as possible.   This included things like starving myself, sleeping and running in a garbage bag /  sauna suit, which became a normal part of my life.  I wasn’t even above spitting in a cup during the school day before the track meet (I learned this from the wrestling team for whom I was a statistician the year before).   Because several of my teachers were also track coaches, I would often get out of their class to run laps around the track (in my sauna suit).  Immediately after weigh-in, after they marked a giant “L” on my hand to show I had made weight, I would have some quick energy (usually a tablespoon or two of honey, a Twix bar, and an apple) before competing.   After the meet, I would go home and eat (probably everything in sight) and then start again the next day for the next meet.    Looking back at it now, I can understand why my mother was concerned that this might lead to destructive behavior, but I had a goal in mind, and I wasn’t going to allow anything to get in my way to achieve it. 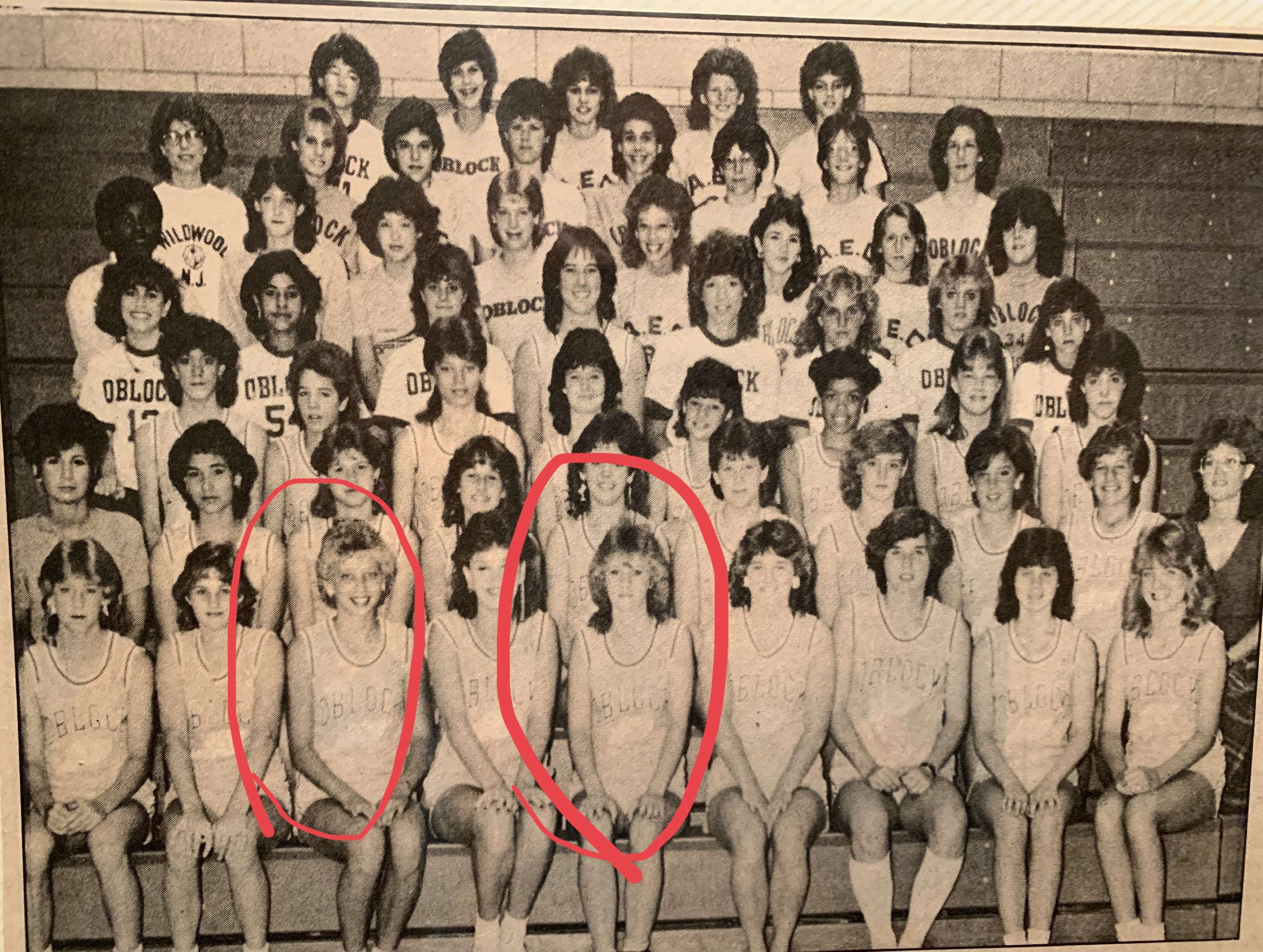 Kelly is the left most circle. I’m the right

I did receive a letter that year.  But more importantly, I had captured the respect of my coaches.  I can clearly remember Ms. Thompson’s words as she handed my letter to me, complimenting me for my determination and persistence.   As much as I had wanted that letter, I realized that having their respect meant so much more to me than I ever dreamed.  I was glad to have made them proud and to have heard them say, “Well done!”

Here’s why I share this with you today…   as you’re going through life, look for the people who are turning themselves inside out to prove something to someone, even if it’s just themselves.   Tell them that you’ve noticed.  Tell them that they’re doing a good job.   When they feel like they can’t make it and are ready to give up, grab a-hold of their arm and run along side them until they reach the finish line.   You may be changing the trajectory of their life. After all, at the end of it all, who doesn’t want to hear the words, “well done, good and faithful servant”?

Be a blessing to someone today.

You are all blessings to me.